So one of the absolutely iconic pieces of Titanfall hardware is the Smart Pistol – a handgun that fires target-seeking bullets. If you’ve ever played Titanfall 1 or 2, you know just how infuriating (and fun!) the gun can be to have in a game. I would be remiss in doing a pilot costume if I did not try to tackle this as a prop. Fortunately, Titanfall’s art director, Ryan Lastimosa, has an ArtStation page chock-full of concept art, renders, and other visualizations of Titanfall’s equipment. There’s two versions of the Smart Pistol – the MK5, from Titanfall 1, and the MK6, from Titanfall 2.

For what it’s worth, I substantially prefer the MK5. The MK6 has a weird angular design aesthetic that I don’t really like, while the MK5 looks like battle-worn hardware. An Etsy user named SlukaIndustries has actually modeled the Titanfall 2 Smart Pistol for 3d printing, which you can find here, but I was not satisfied with going that route. I wanted the Titanfall 1 pistol, and I wanted to add electronics into the mix.

Using the excellent references from Lastimosa’s ArtStation page, I set about making a base model for the Smart Pistol, intending initially to make a very basic prop with a few LEDs. I spent about a week of my free time modeling the gun up, and in the course of doing so, the scope of the gun got more and more complicated. I just… kept adding to it. The final feature list contemplated for my ‘advanced’ version of the Smart Pistol is as follows:

For a time, I considered trying to make the slide-action work on the gun, or adding a vibration motor to simulate the gun ‘kicking’ when firing, but I had to draw the line somewhere.

So, with that said, lets get to the meat of it – the actual model.

The gun breaks into five ‘main’ exterior shell components, with a number of other small, extra interior parts. This was built this way to make printing easier, so I could orient flat sides down onto my print bed and section it into smaller parts that would fit in my machine.

If we dig into the cross-section of the gun, you will see that there have been a number of interior channels hollowed out to accommodate the electronics I have planned.

The safety was the biggest head-scratcher. I wanted to be able to use the paddle like an actual safety on a real gun to engage the power from the 9v battery in the handle, but that requires either a rotary switch that only moves, like, 10 degrees, or some other way of doing it. After a while of brainstorming, here’s a look at the safety action I’ve come up with.

The slide switch used in this instance is the MS12AFW01, which just so happened to have a 3d model available which made the job a little easier. I’m not sure if the switch resistance is going to be enough, by itself, to keep the safety in a fixed position, but I’ll engineer something if I have to tweak it.

The trigger, on the other hand, uses a snap-action switch I had lying around, and a 10mm spring.

Here’s a more exploded view of all of the gun’s components sectioned out for printing.

For the sake of being thorough, here’s a comprehensive list of parts I believe will be required:

While I can gladly go on at length with images of how the gun’s designed to operate, I felt it would be easier (and more instructive) to record a brief video doing exactly that. 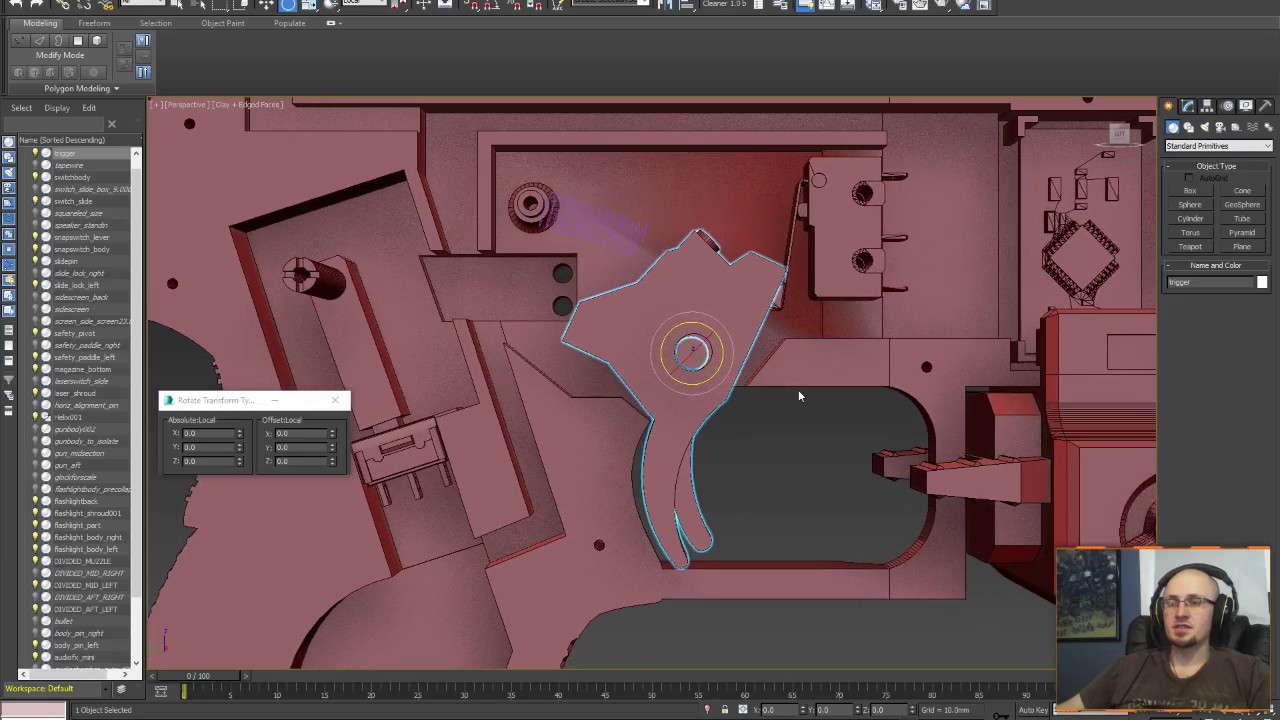 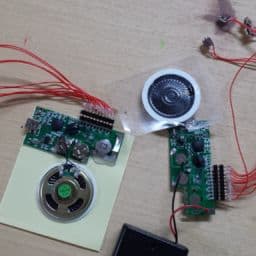 Original audio circuit on left, mine on right. I figured out the points to jump power across and used 3xAA batteries to replace the 3 1.5v coin cells, just to test. Still works. Now… 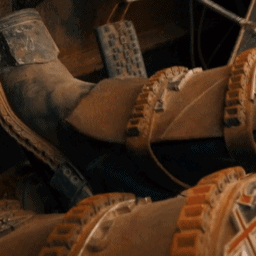 Had a bit of a prototype run with the airbag, and I’m still not happy with it just yet. It’s quite a challenge to figure out ways to sew the fabric to emulate what… 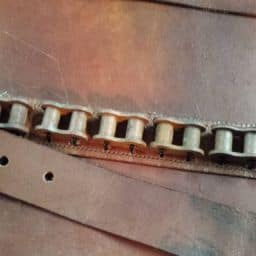 Most of today was spent getting some of the details on my shin pads done, since I like jumping around between parts of this project like crazy. The links were primed with a rust-colored…

I’m mostly just monkeying around and doing what I see other people do when it comes to making these molds. I hope I understand the process right, but I guess we’ll find out! We… 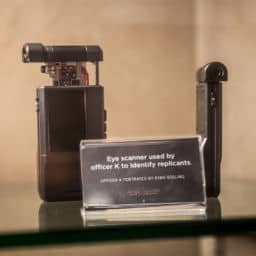 Just Look Up and to the Left

So I’ve been bitten by the Blade Runner bug thanks to the new movie and I wanted to make a couple things from it for my own collection. Everyone in the props world is… 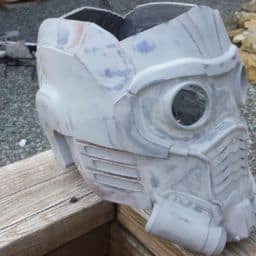 I came back to this after some time off from tinkering with it and started assembling things in earnest. The helmet got another coat of primer and some light sanding so I could see… 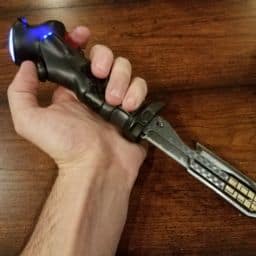 https://www.youtube.com/watch?v=01RfFmuc26k The data knife is done and dusted! Though I’m probably going to make a second version to try a few other painting ideas. The carbon fiber texture was painted on with spray paints,… 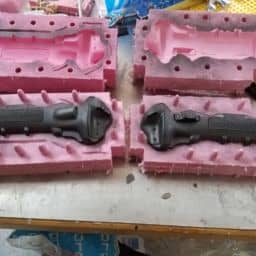 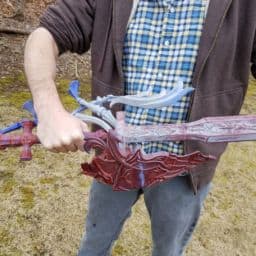 The Sum of its Parts

After weeks of sanding through the evenings on this thing, the antiquated murgleis is finally coming together! We fully assembled the prop, which is not something I actually planned on doing at this stage;… 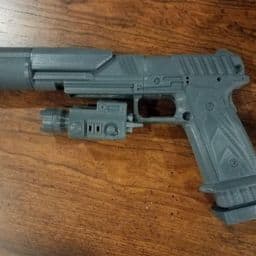 Progress on the Smart Pistol. I can’t tell you guys how happy I am that everything seems to work and fit together pretty much exactly as expected. I’ve even got some shaky video to… 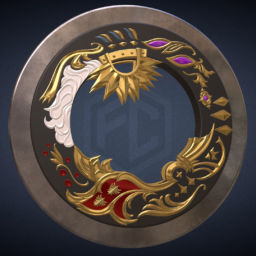 I guess I’m getting a following for these – another commission project from Final Fantasy XIV, this time for the Dancer class. 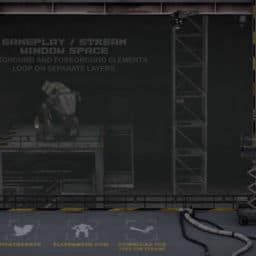 This project was done for the fun-as-hell free-to-play mech game, Hawken, available on Steam. I took the ‘garage’ look of the game and extended it to the overlay itself. I figured the main design could… 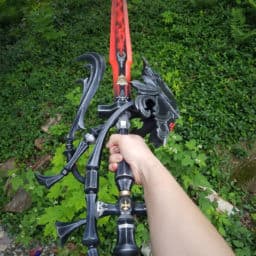 With the Murgleis suitably reinforced, the only thing left to do was paint… 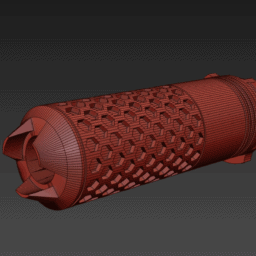 Well, if you’ve played Titanfall 1, you know that the most common piece of kit to grace the Mk5 Smart pistol was a silencer / suppressor. I felt it was only fair to take… 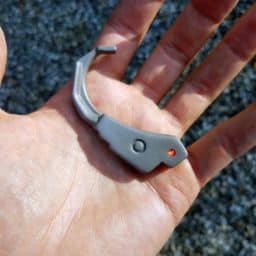 A few years ago, right after the debut of the first Guardians of the Galaxy film, I banged together a simple 3D model for Star Lord’s earpiece in Sketchup, before I started figuring out…

Hello, I am very interested in making one but I know nothing about coding do you have the code to release. Please it would be greatly apprisiated