While I was happy with my older dataknife versions, I kept having a nagging feeling I could do better. This, I think, is better. This knife is the result of a lot of different techniques and technology. The manufacturing process involves 3D Printing (to make the master copies), cold casting, laser etching and engraving, electronics and programming, and a whole lot of sanding, polishing, and painting. They are as close to a ‘real’ Data Knife as I think you can get at this point in terms of effects. 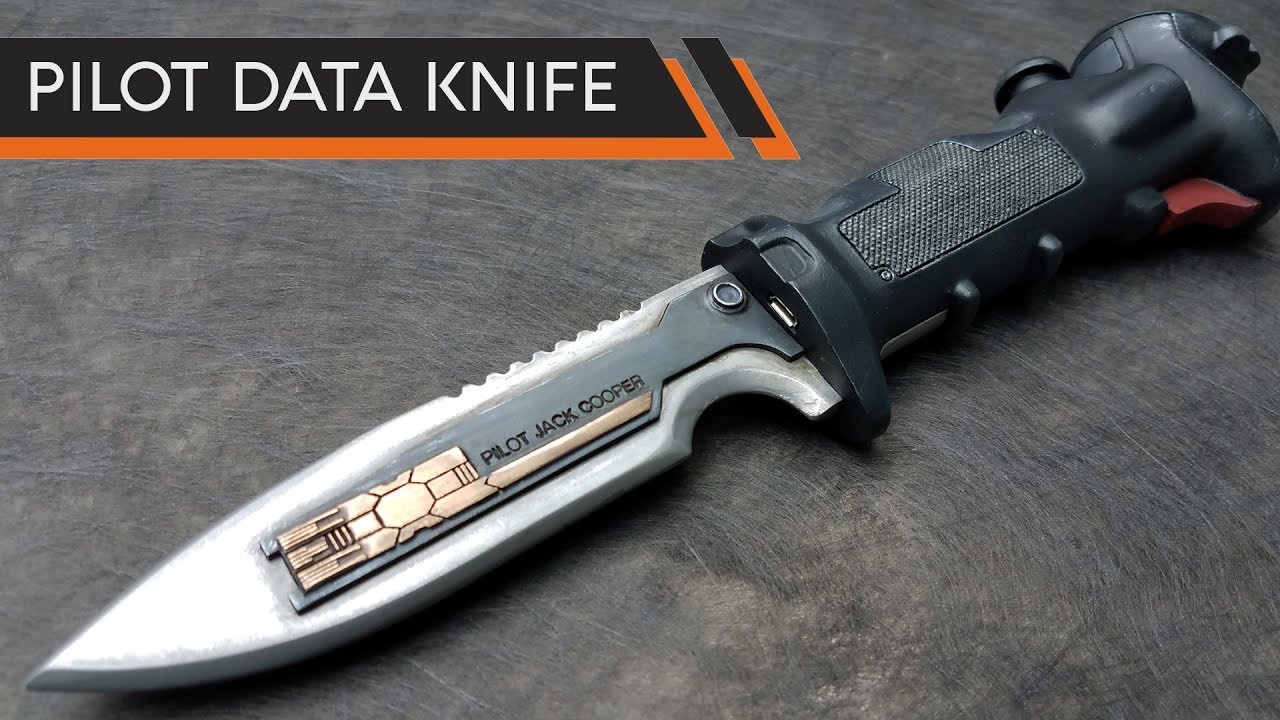 As I mentioned in a previous post, I spent time making actual molds of these prints this time around so that I could have a cold-cast metal item with some real weight and shine. The blade was done in cold cast aluminum, while the circuitry inlays were done in cold cast bronze. The handle was cold cast with graphite… although it did get painted over, this should mean that any wear, scratches, or other damage to the handle should weather fairly realistically. This thing has a good weight to it compared to my earlier 3d printed prototypes. The display at the top of the handle was done on my very own home laser engraver, then covered in a dome lens which is cast in clear resin and polished for clarity. The parts were all pressure-cast to eliminate as many imperfections in the final surface finish as possible.

The electronics in the device are not cheap, but after refining this idea for a few months they are the most reliable components I could come up with. A rechargeable lithium polymer battery powers the whole assembly; a microUSB charging port is featured towards the blade-end of the handle and can accept a standard phone charger to recharge. An RGBW Neopixel Jewel is installed at the top of the knife and a pair of 3mm blue LEDs are inserted into the side of the handle. A piezo buzzer is also inserted into a small acoustic chamber sculpted inside the handle to enhance its effective volume. An arduino is embedded in the knife that controls the animating lights and sounds, all controlled by a toggle thumb switch. On a full charge, it looks like the knife can run continuously for about 4 hours, but I don’t know why you’d ever want to run it like that.

The knife now features a clear laser-engraved acrylic display base. The sides of the blade were also custom laser engraved; the one pictured here reads “PILOT JACK COOPER”, after Titanfall 2’s protagonist. This could easily be changed to any other text (e.x. “LT. GRAVES”, or, like my in-game handle, “SUDDENLY_BEARS”, if you’re feeling less serious).

I’ve had a great time working on this, and now I want to see if I can’t recoup some of my costs. The question I got absolutely buried with when I shared my first version of the Data Knife was if people could buy one. Since that was a 3D printed piece, it didn’t make sense to try and sell them. However, I’ve got molds for these things all ready to go, and I know there are probably some fans out there brave enough to pony up for a knife to display along side their Collectors’ Edition helmets. The molds tend to only be good for a limited number of pulls, so I will probably be making and selling only a handful of these things.

How much dose it cost to buy the full data knife

Unfortunately, I’m not able to offer these with a real blade. These are props and showpieces only. Sorry!

How do I purchase a data knife from you?

I have this from Thingiverse but bought it here to thank you for all your hard work on it!