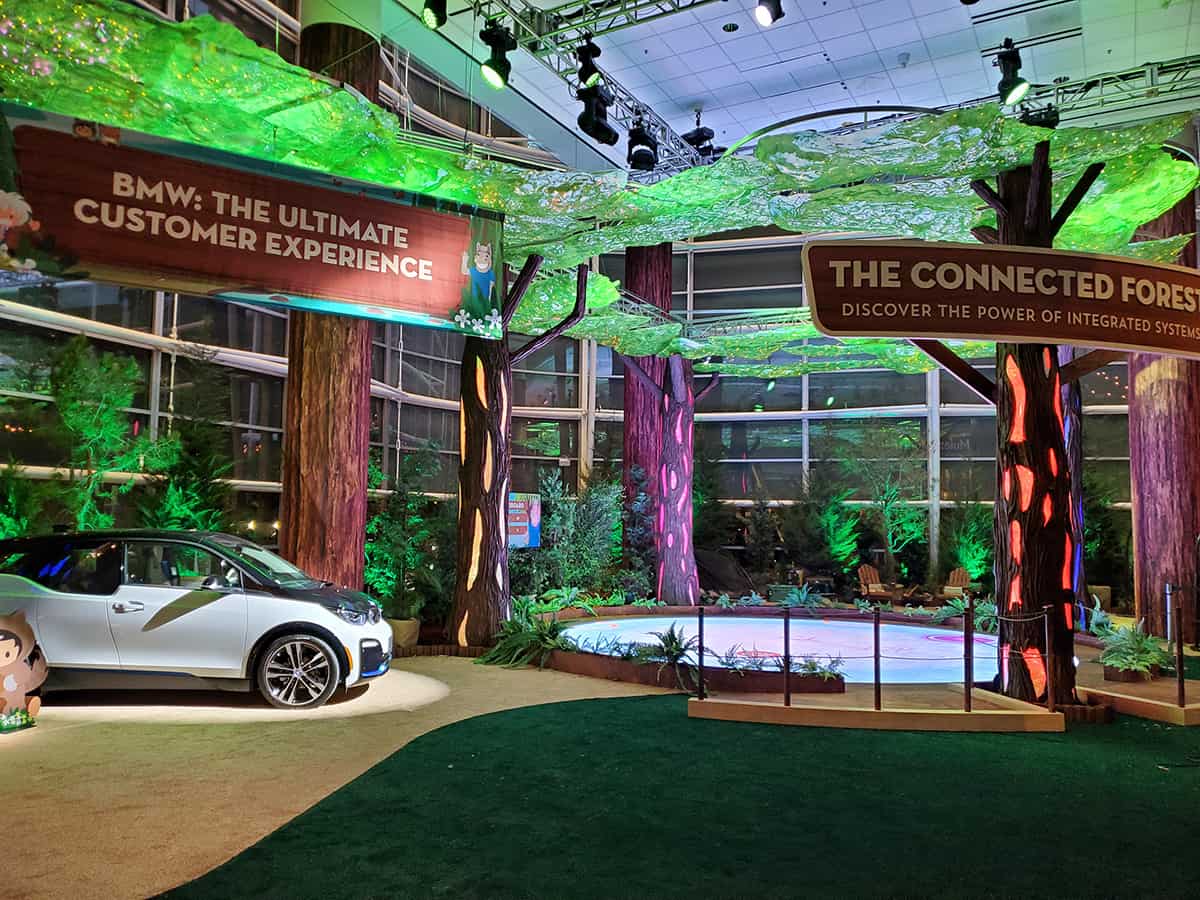 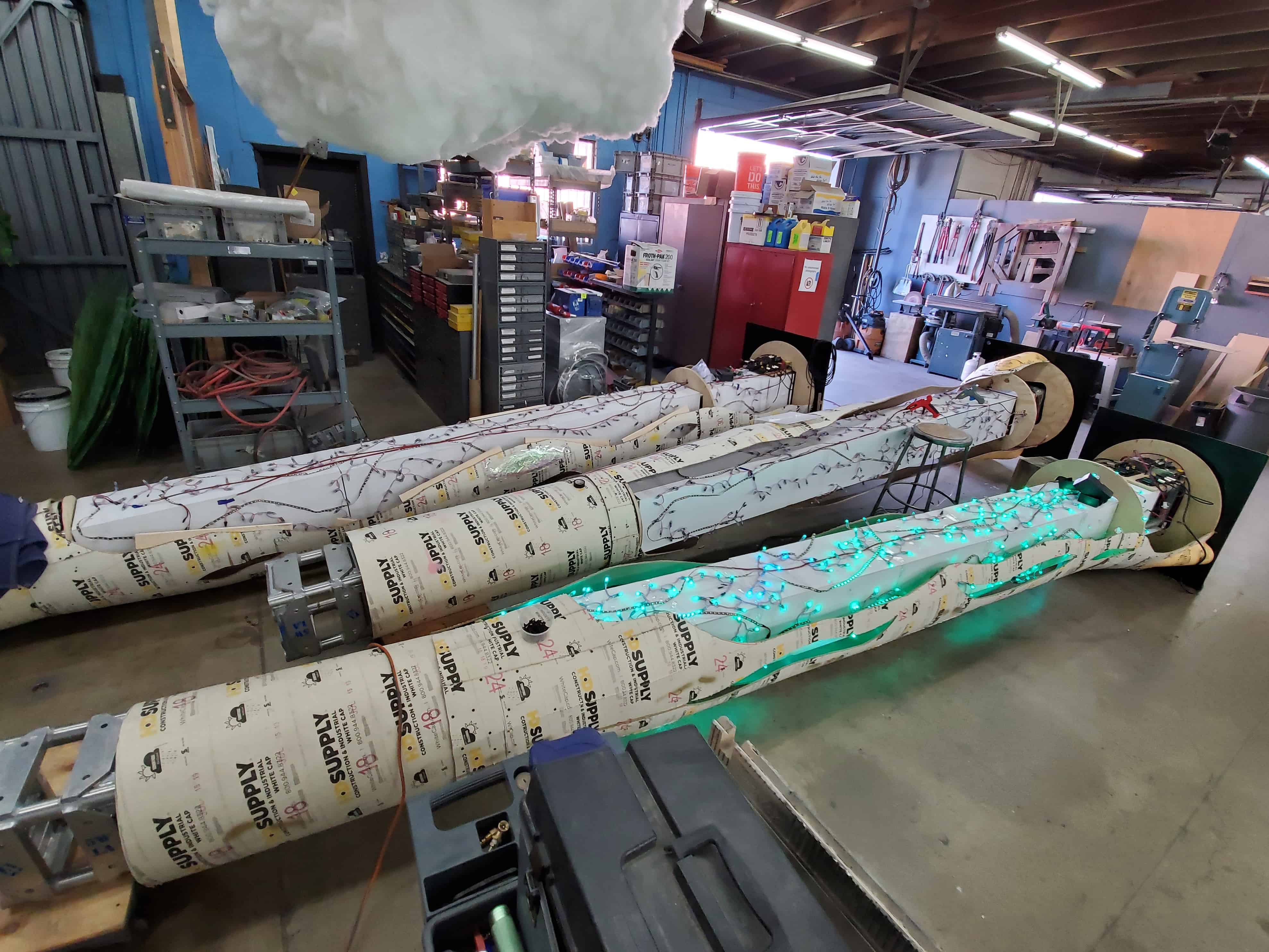 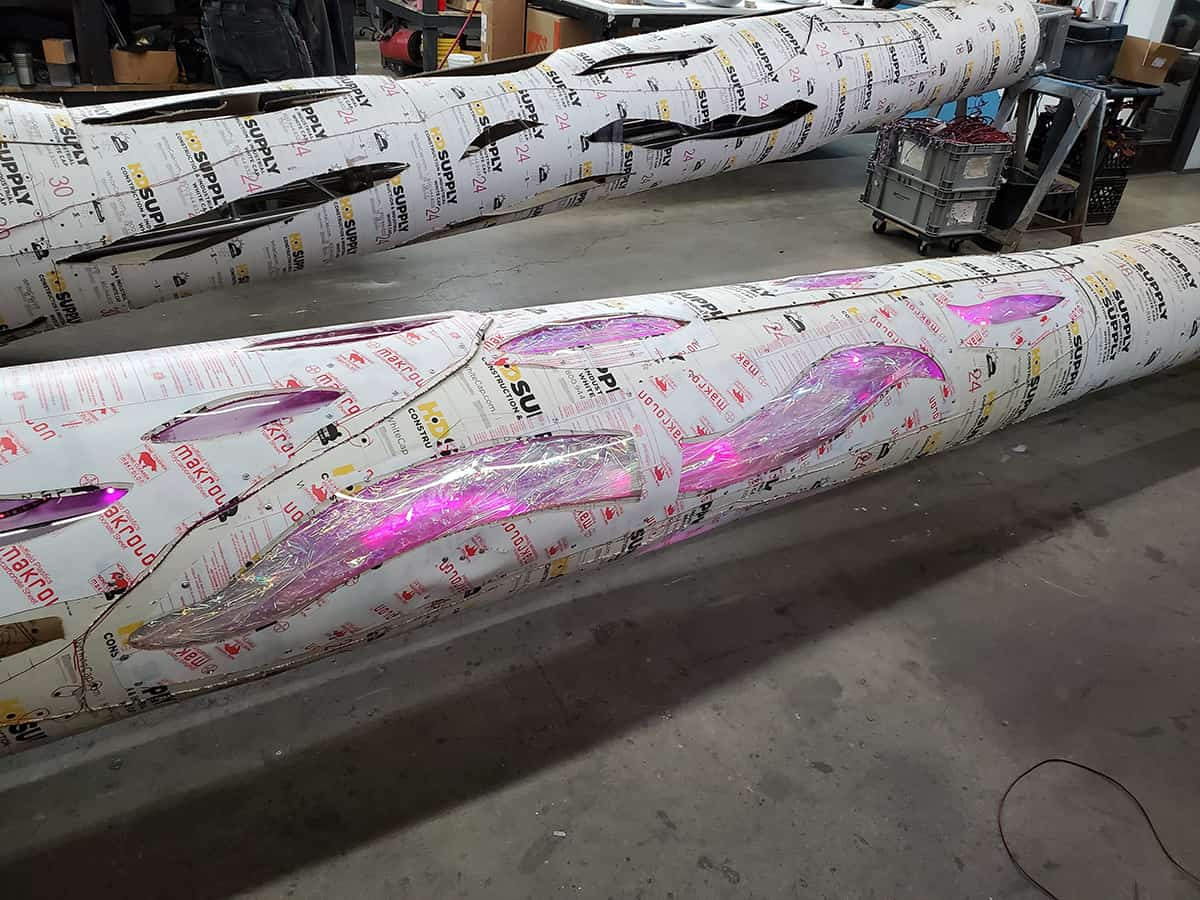 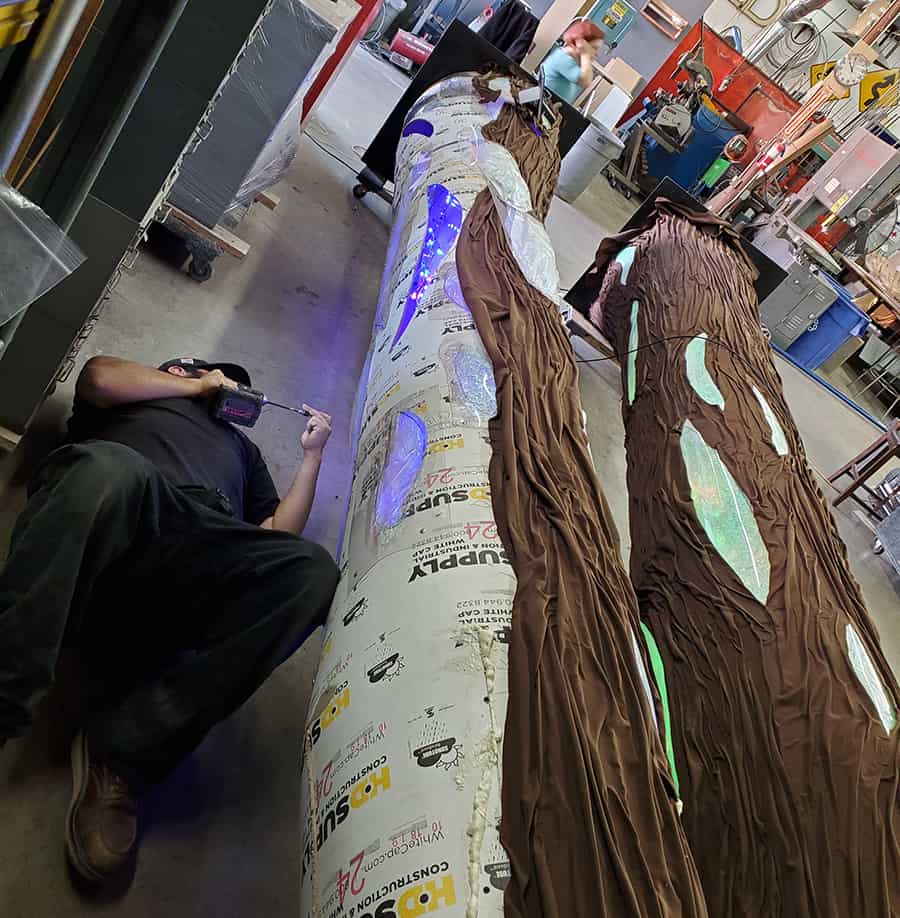 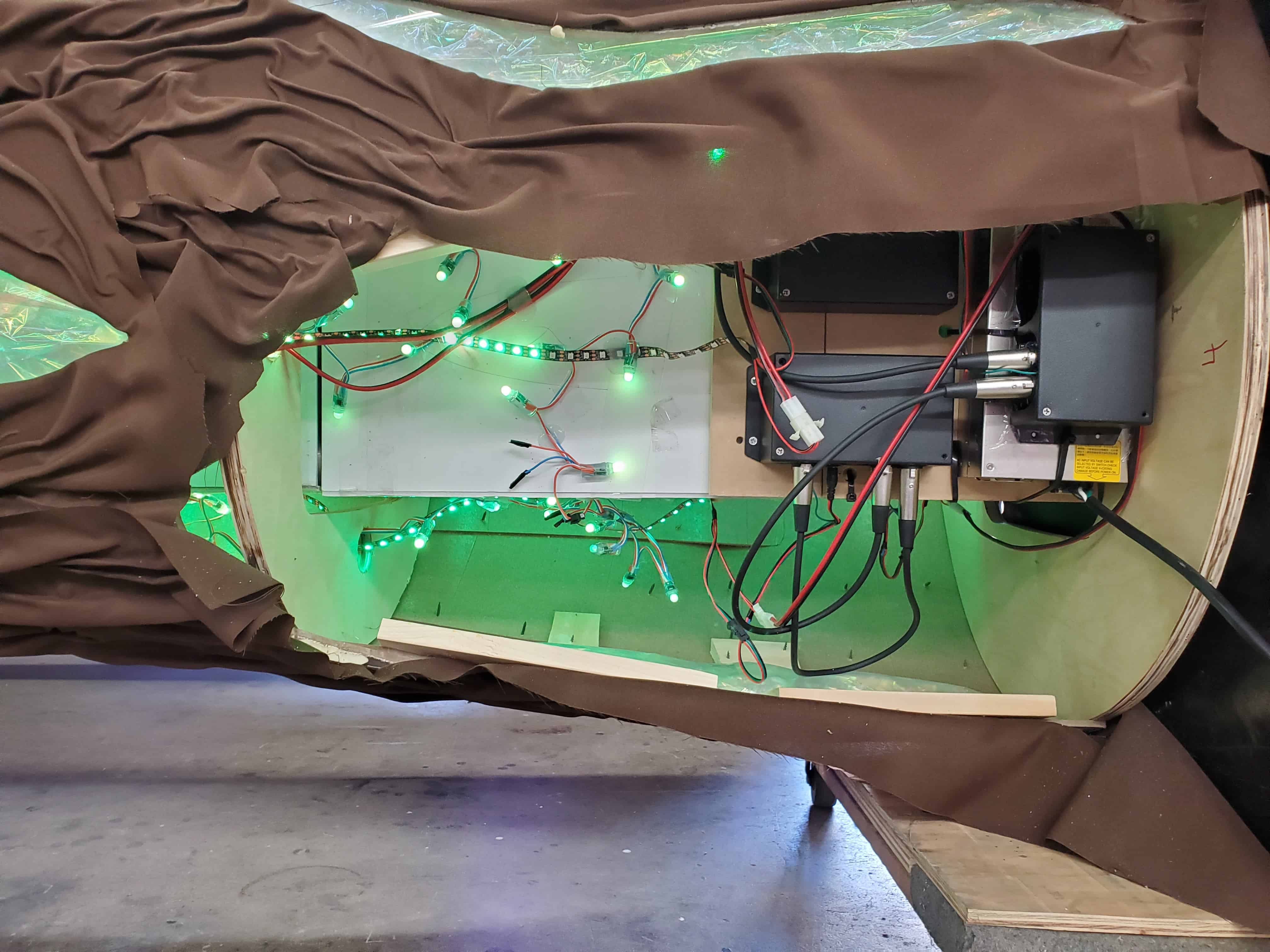 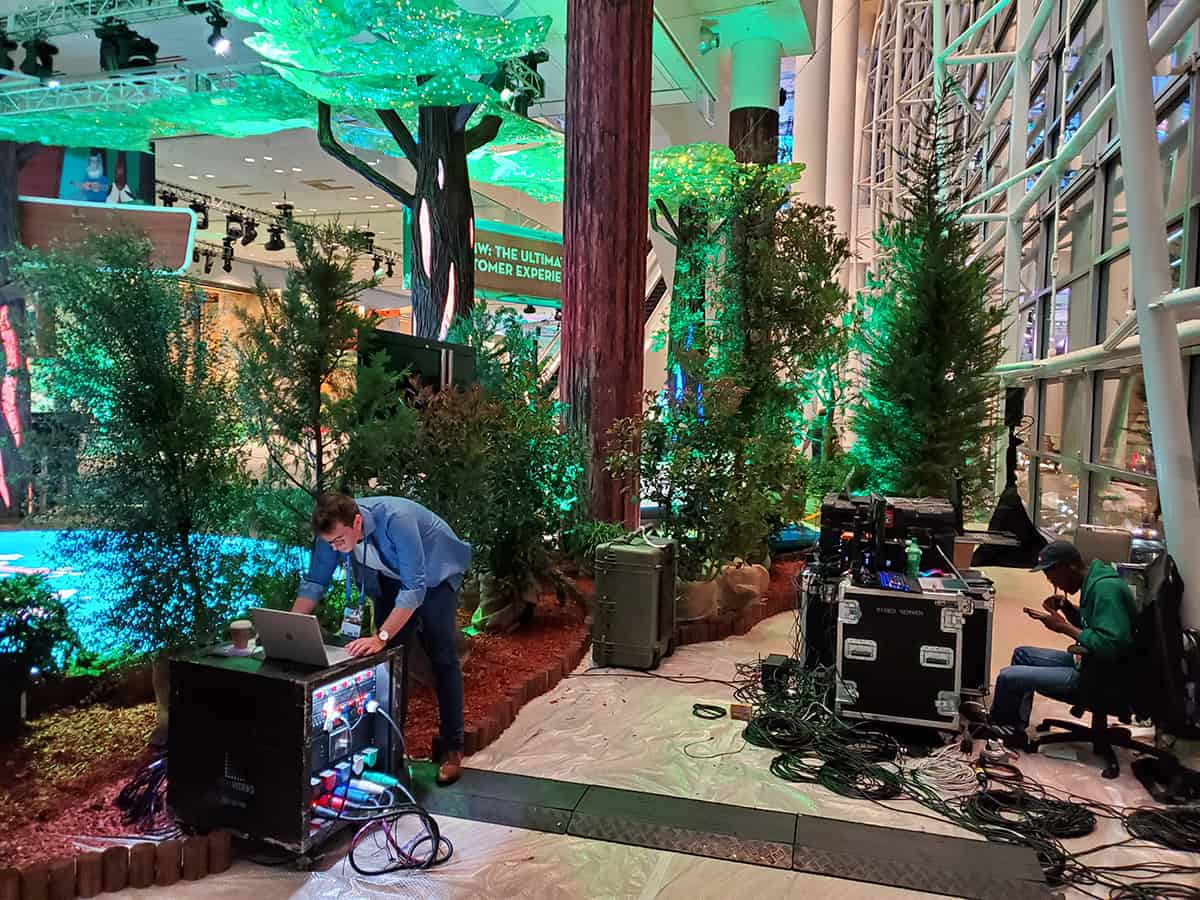 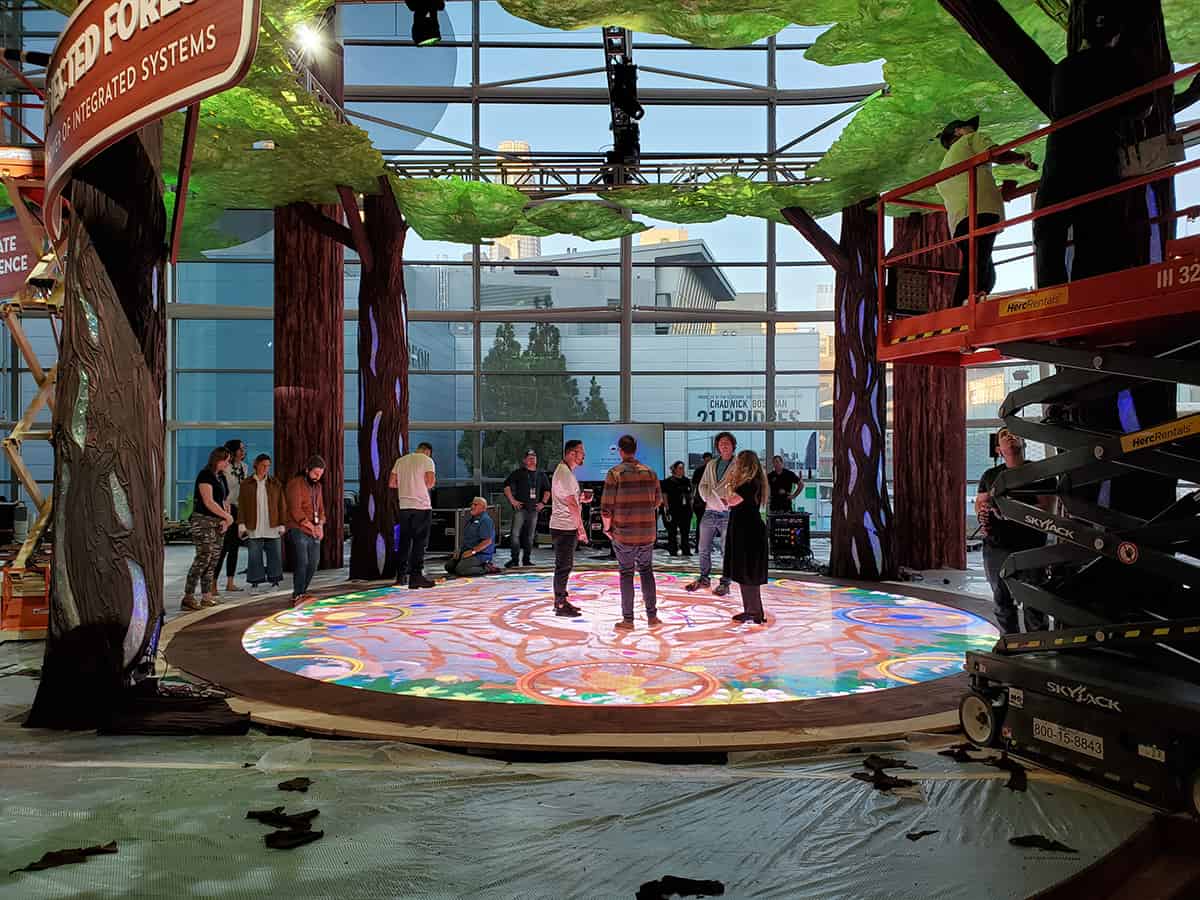 This project was part of an installation at the Dreamforce 2019 Convention in San Francisco, C.A., and was completed during my time with Flix FX, Inc.

I was responsible for the design, building, and installation of a set of internally-illuminated ‘trees’ that would interface with a game running on the electronic dancefloor, which was produced by another vendor. The trees had approximately 2,000 individually-addressable LEDs each that needed to be responsive to the events happening on the floor, including animation and color changes as the game playing out on the floor progressed.

I personally worked with the outside team producing the Unity app running the dancefloor animations in order to establish a signaling protocol via DMX, which allowed for the trees to ‘talk’ to each other and receive sequencing instructions for these effects. After devising these protocols, I wrote the necessary code for all of the animation and lighting effects and extensively programmed approximately two dozen Arduino units. I was responsible for soldering, wiring, and otherwise producing many hundreds of meters of cabling, plugs, and other electrical components that were ultimately installed within the trees. Each tree was produced around a Sonotube concrete form, which allowed them to be slipped on and off of rented structural box truss without needing to be permanently attached, and the ‘brains’ of these units were installed behind removable maintenance hatches at the base of each tree trunk.

I was also involved in the creation and production of digital plans showing our proposed arrangement of the tree trunks, canopies, canopy lighting, and other structural truss elements. I refined these plans to the point where we were able to submit them to an engineer for review and approval prior to the installation of the exhibit in San Francisco.

I was ultimately part of the team that personally traveled to San Francisco to install this project at Dreamforce 2019.

Thank you all, so very much for your contributions to this year’s Dreamforce! It was without a doubt, one of our most successful runs of this show... When I look back on the photos from the event, I am amazed and in awe of what we have produced, and I can not thank you all enough for the collaboration across the board, from pricing and planning, to all the flexibility with schedules and visits, to the un-matched support that was brought to the show site.

What an amazing Dreamforce and what an amazing team!  A huge thank you to you all for being such wonderful partners in making the magic happen. Despite some challenges, late changes and lots of new, the entire team rose to the occasion with passion, dedication and grace under pressure.  Each one of you brought your expertise, talent and A game every single day... truly couldn't do it without you.