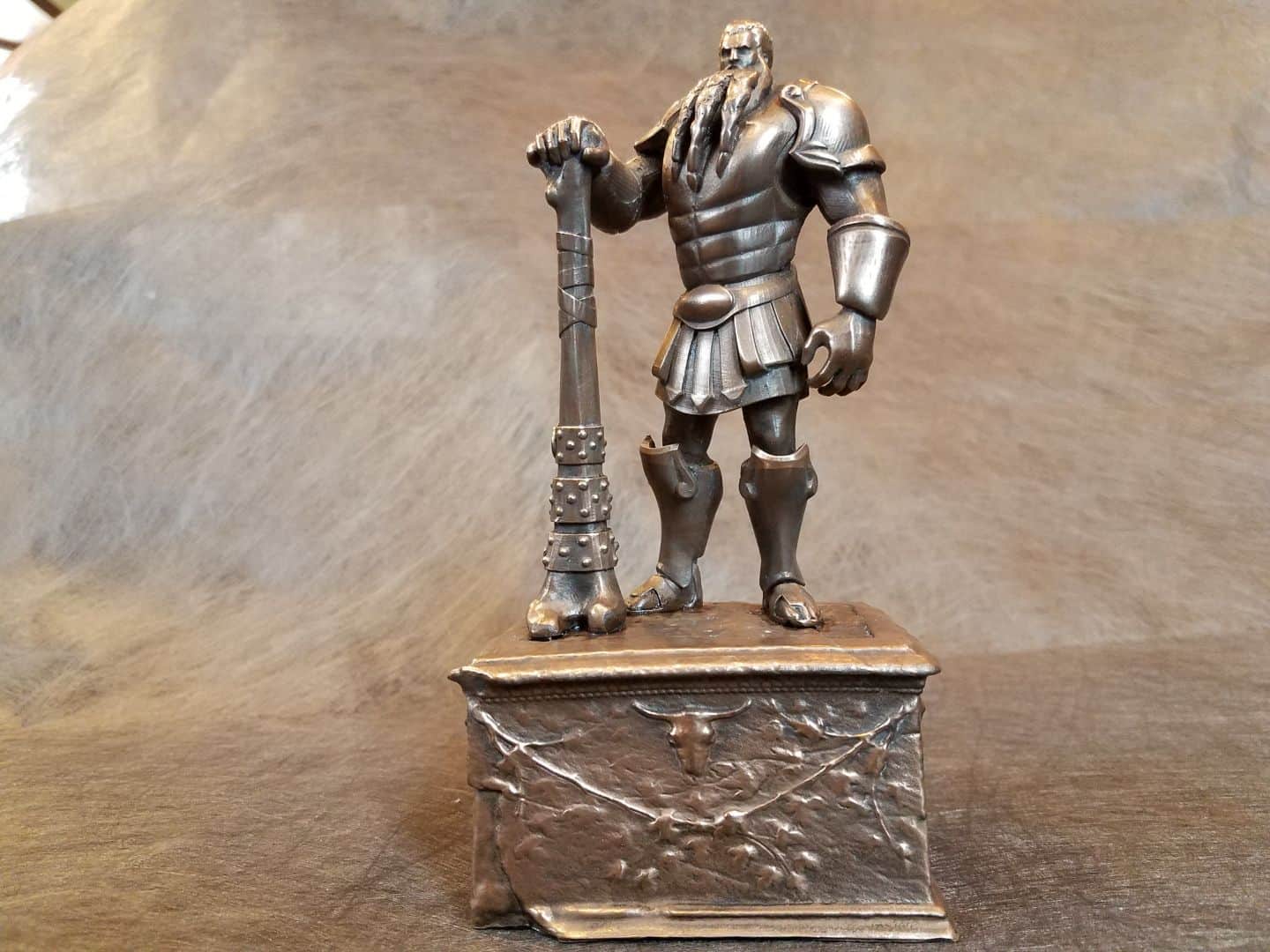 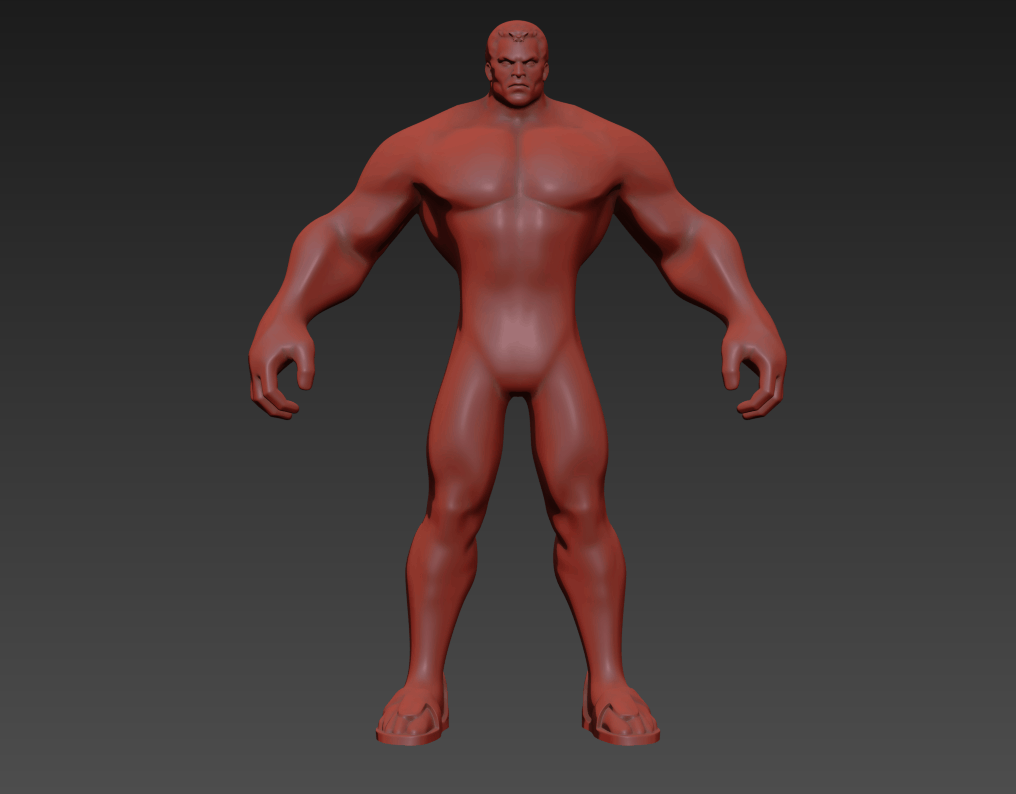 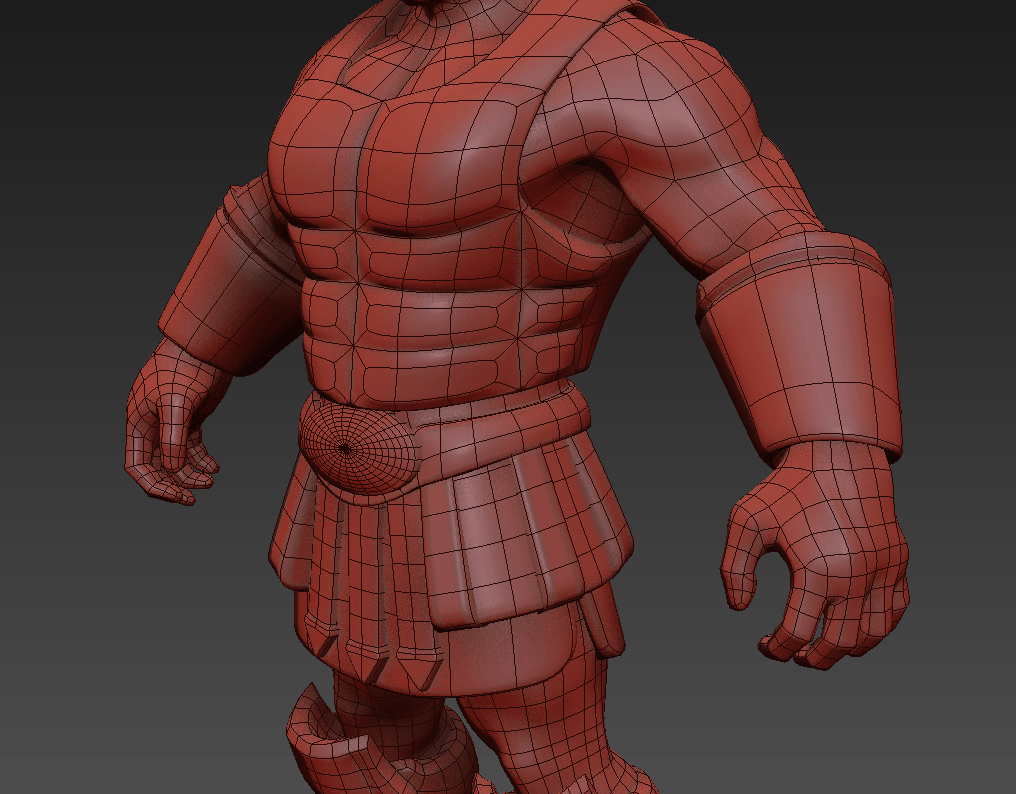 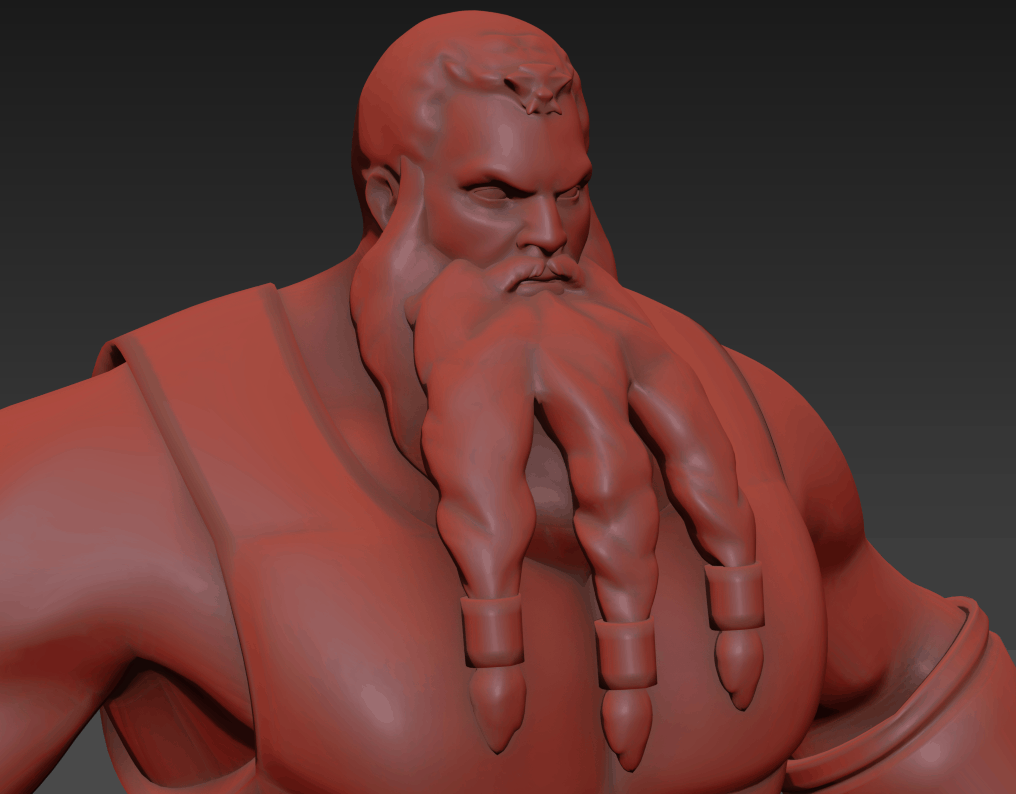 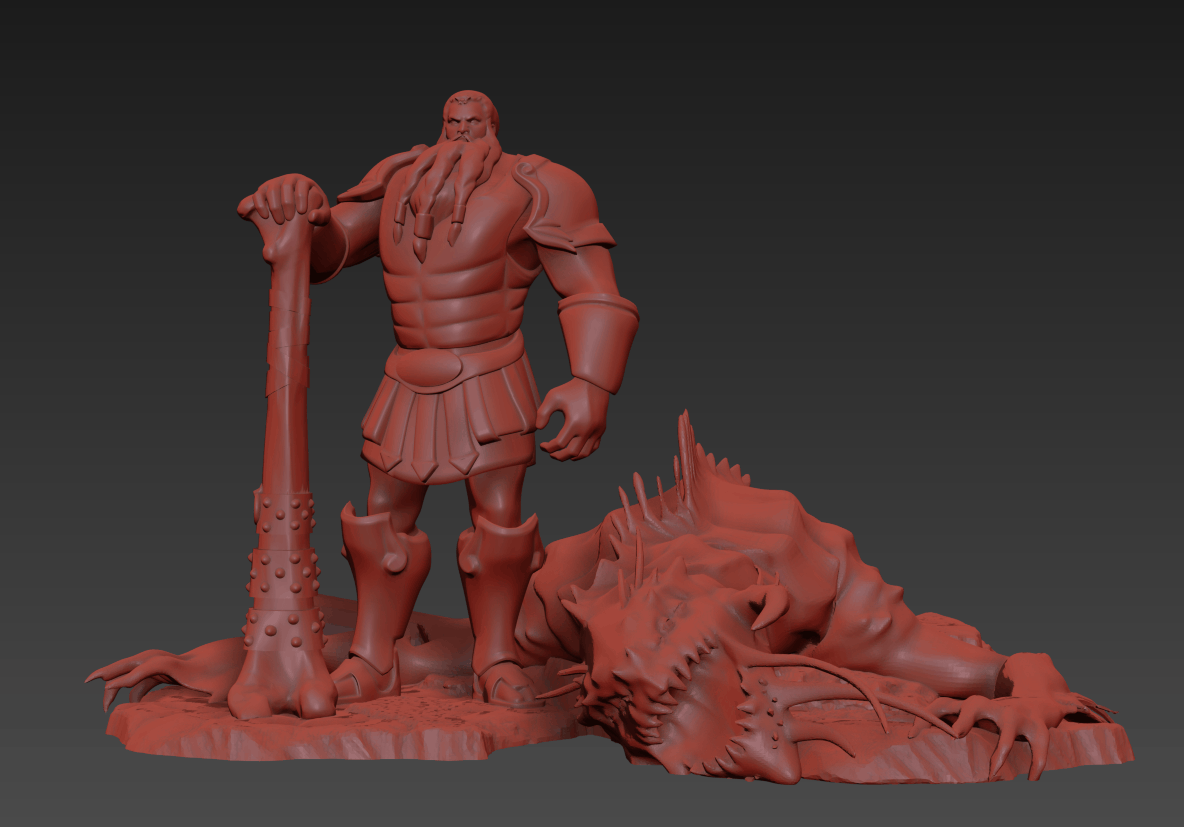 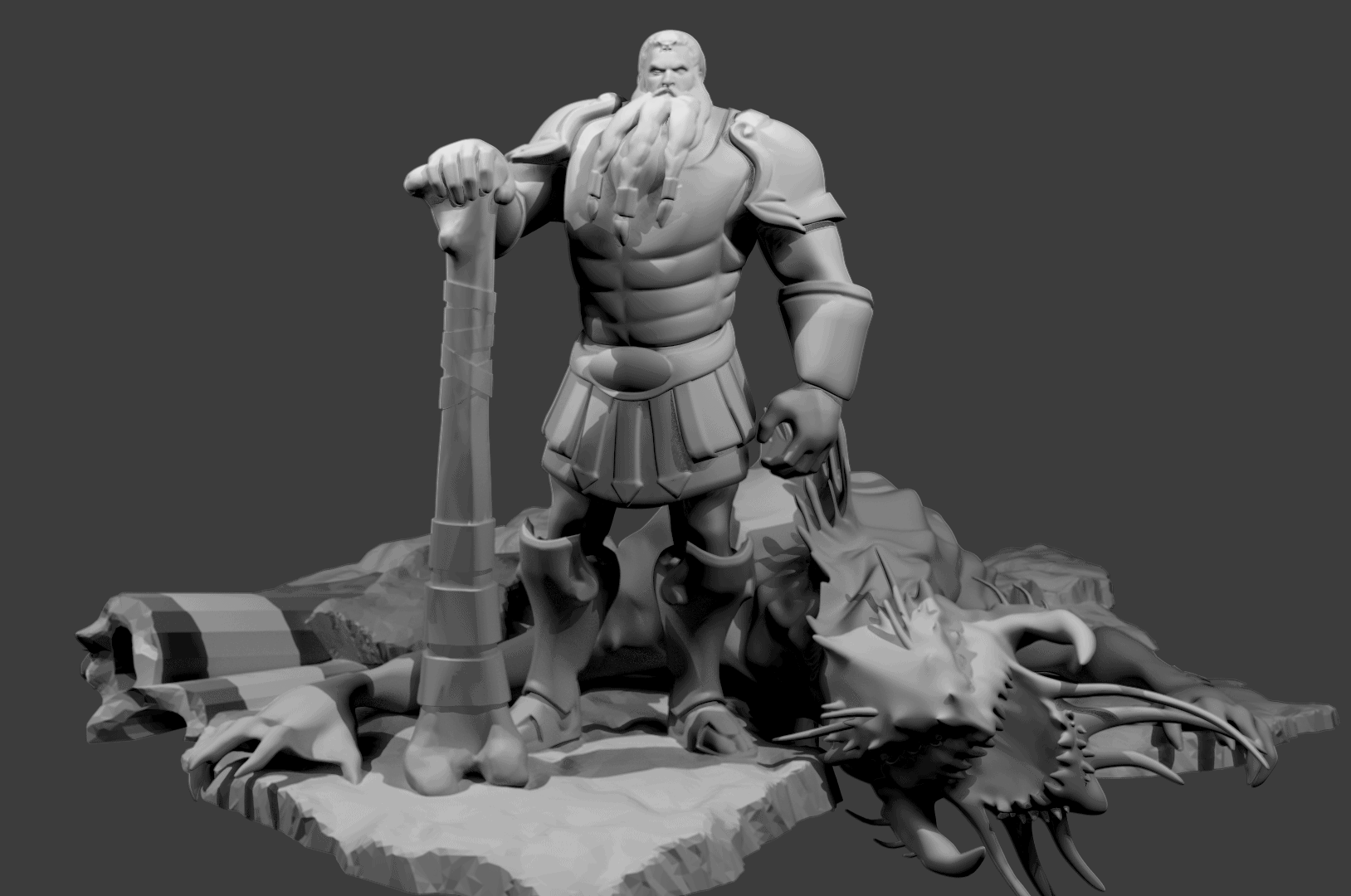 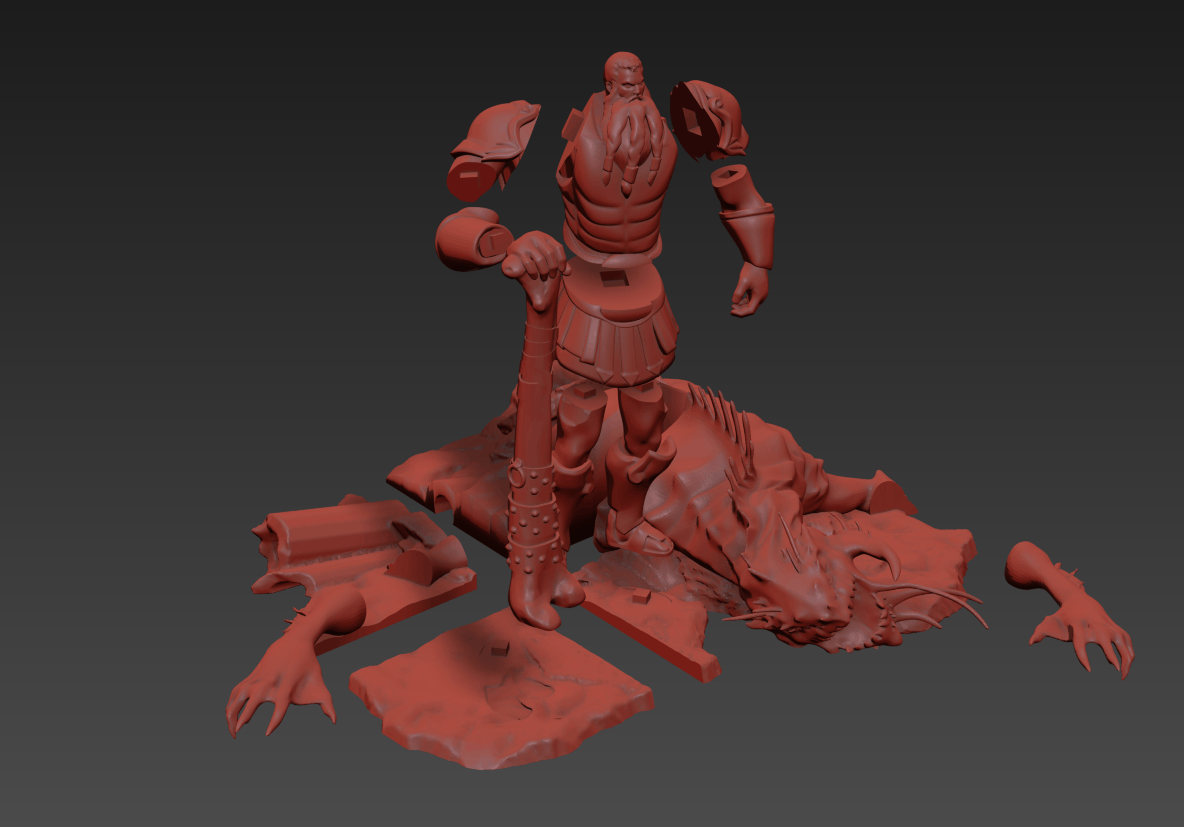 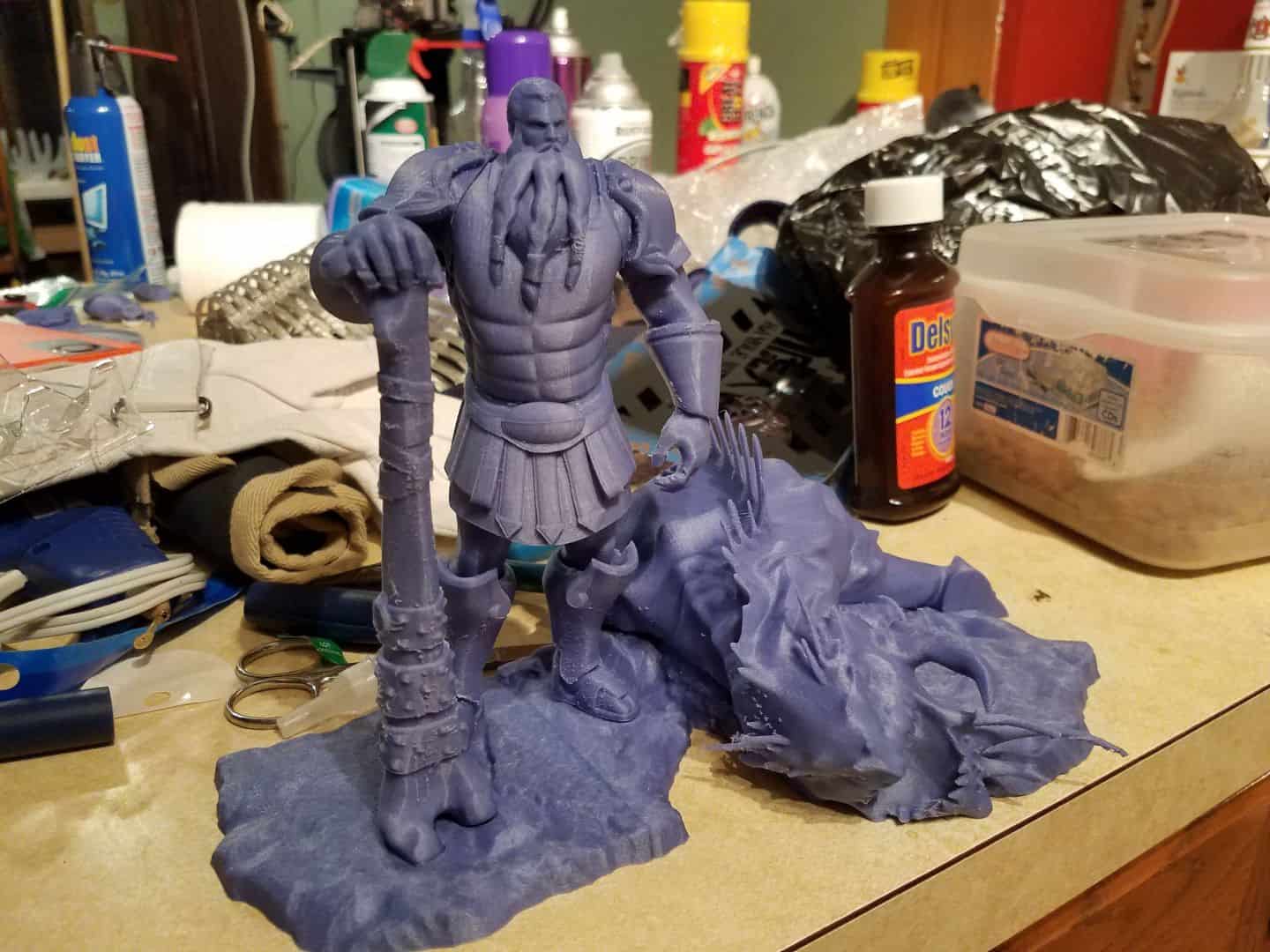 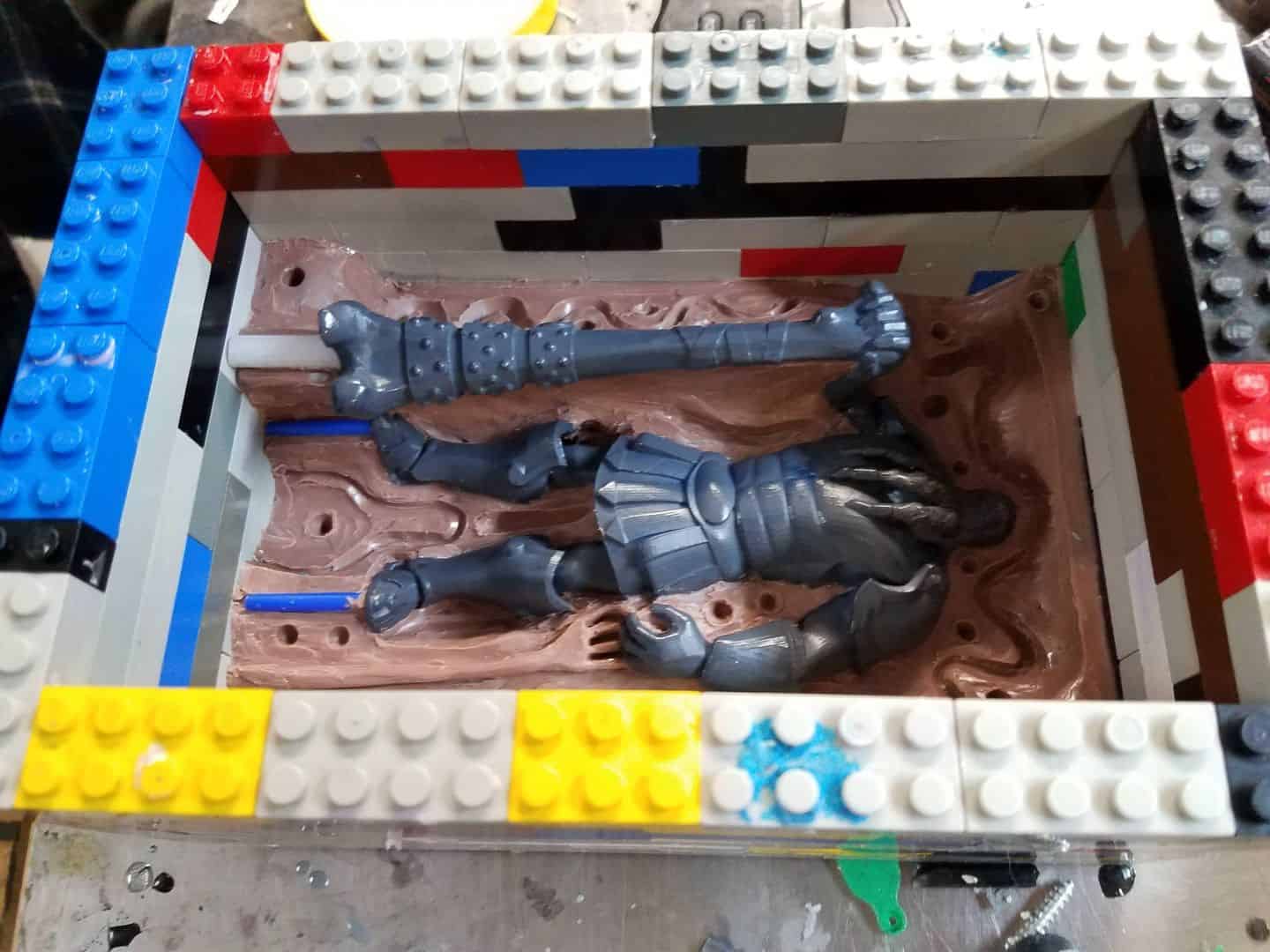 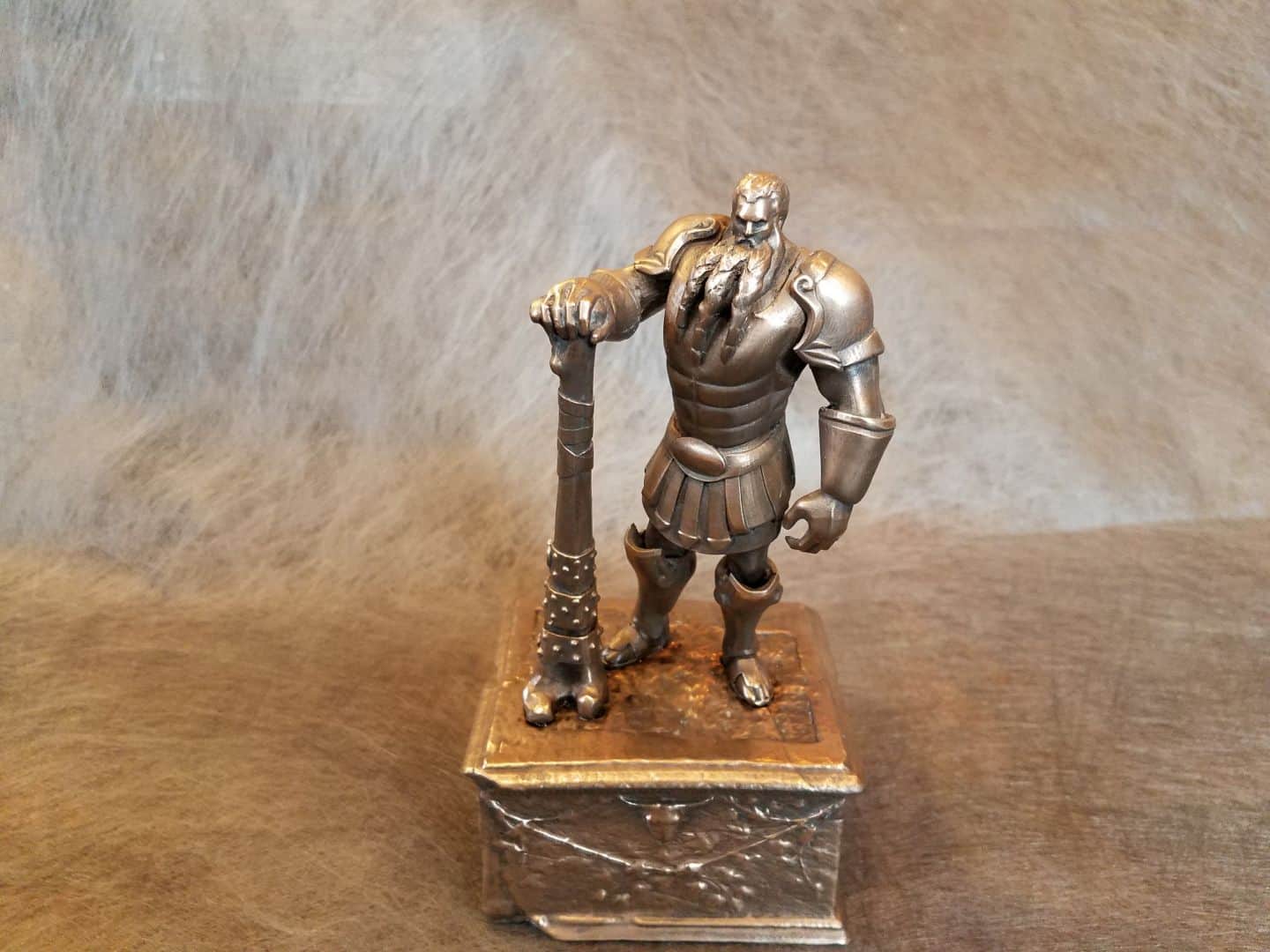 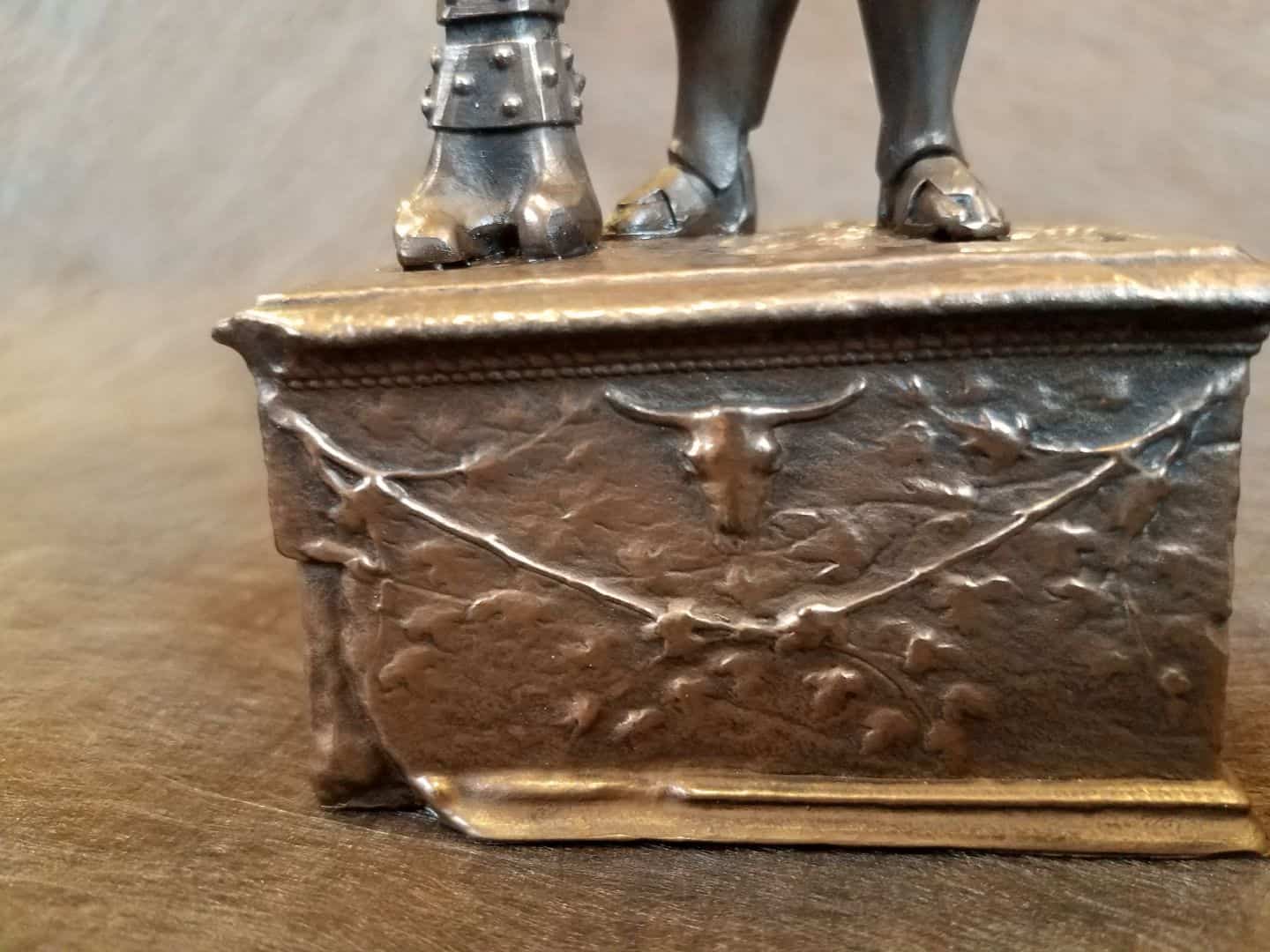 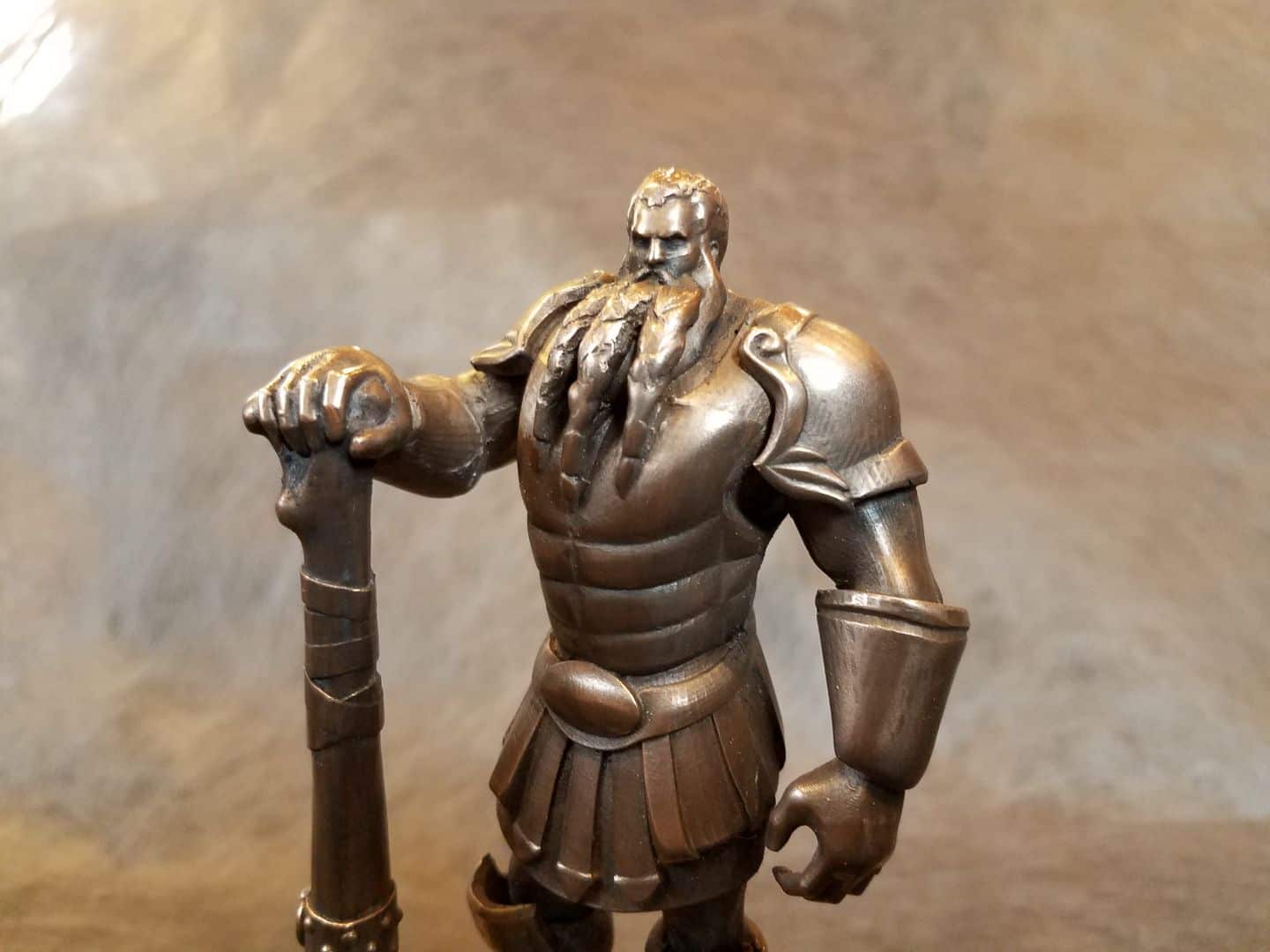 This was done as a personal project – a gift for a Secret Santa event – and was intended to tie-in thematically to a Choose-Your-Own-Adventure game that both I and the recipient were fans of. I decided to make a bronze statuette of the story’s main character, a Herculean-styled monster hunter named Enkidel. If you’re interested in learning more about the context of this character, I wrote a brief summary here.

In the interests of time, I started this model by using the “Hercules” character from Smite as a base. Using 3D Studio Max, I refined the underlying body shapes into something a bit closer to what I wanted. I modeled up a few items of armor and weaponry for the character that were more consistent with the author’s descriptions, including Enkidel’s monster-bone club. Using some rudimentary rigging tools I was able to pose the character leaning on his weapon in the casual, just-killed-a-baddie posture I had in mind.

Initially, I was planning on making an entire diorama of Enkidel standing triumphant over a slain sea monster. I modeled the scene out, incorporating a base with ruined rubble columns and the monster in question. I ultimately felt that didn’t have enough time to print, finish, and paint something of that scale, so I ended up dialing the idea back to simply a cold-cast statue of the character on a base. This saved me the trouble of painting, as I could simply polish and weather the finished piece.

The character model was printed on my Peopoly Moai in resin. I incorporated a photogrammetry-scanned base and also resin-printed that item after making a few cutouts to fit the character’s feet and weapon correctly. These parts were primed, sanded, and sealed, then molded using Mold Star 20T. The models were recast in Smooth-Cast 326 with bronze powder, then polished to a high shine. I tried a few finishes, including an antiqued effect and the use of an actual oxidizing patina, but ultimately I liked a simple pass with Rub N’ Buff Black metallic polish, which helped bring out some of the details and highlights.